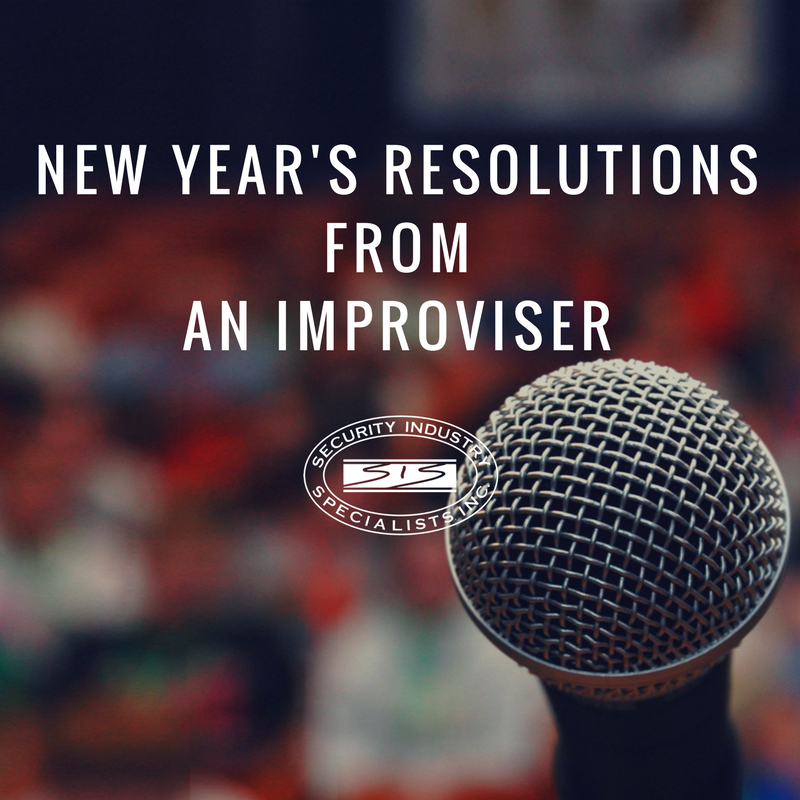 New Year’s Resolutions From an Improviser

As we start a new year, we’re trying to make self-improvements – work out, diet, read more corporate blog posts – a resolution that we tend to overlook is our mental health. 2016 was a tough year, especially for celebrities. How about we make 2017 feel more manageable! Oddly enough, I’m turning to improv to help me.

When I moved to Seattle, I was in a new position, didn’t know anybody, and the city was foreign to me. It was a huge change and, frankly, a challenge for me. After a year of trying to adjust to a new environment a.k.a. the Seattle Freeze [see #1], I signed up for an improv class.

The lessons taught in improv are meant to improve how you work in a team and trust in yourself. We should always be striving to be better listeners, supporters, and more confident in our choices. Improv focuses on those challenges.

Anyone who has taken an Intro to Improv class is familiar with the concept of “Yes, And” – it’s practically the improv motto [see #2.] The building blocks of any good scene are with these two words. “Yes, And” requires you to listen to your teammate, register and understand what they’re saying, and heighten it.

Creating an improv scene starts with taking an offer that your teammate has given you and building on that offer. Each offer is a gift; what we do with that gift can determine the direction of the scene. If an offer is dropped, your team has lost out on a great opportunity.

If two improvisers are at a desk, one says, “Man, those kittens have really hurt our social media outreach.” The other says, “Yeah, they’ve drunk all the milk in the break room. We need to order more.” Wait, what happened? One improviser created a world where kittens were in charge of their company’s social media and the other brought up their milk supply – missing the initial offer. The first improviser, and even the audience, will notice that you didn’t pick up on it [see #3.]

Every offer is an opportunity. In an offstage work scenario, anything and everything a coworker says or does is an offer. If a coworker says they enjoy editing in their free time, accept what they have to say and let it settle in. They just gave you a personal detail about themselves and how you respond can determine where your conversation goes. Maybe they can help you edit a training video, maybe you’ll be forced to watch their videos; either way, at least you’re an active listener and it will eventually build into a stronger relationship.

Even if a coworker needs your help but you’re too busy, telling them that you understand they need help but don’t have the time also falls under the “Yes, And” philosophy. You’re acknowledging your teammate’s problem while keeping in mind your work schedule.

Mentally telling yourself “Yes, And” to whatever life throws at you forces you to be present in the moment and listen to others. While we can’t say “yes” all the time, we can acknowledge other’s offers.

Every Team Member Has Something to Offer, Even the Difficult Ones

In improv, like work, you are sometimes tasked to perform with a teammate who is difficult or has a different experience level. The hardest improvisers to work with are the ones who don’t listen, steamroll scenes, and don’t respect other teammates. After looking back on difficult scenes, it really comes down to perception. I didn’t enjoy working with inexperienced or difficult improvisers, but it really was a reflection on my skill level. How do you move a scene along when you receive a “bad” offer?

One performance, an improviser called me a “panda” on stage [see #4.] I froze. I didn’t know what to say. He followed the parameters of improv –  he gave me an offer and I had to “yes and” it. What did I do? I ended up accepting it, relinquishing any power I could have had in the scene. For a while, I was upset. How dare he put me in that position? I was the bad guy. The audience hated my character, and ultimately, I hated myself too.

It all came down to how I perceived the situation. After watching other talented improvisers maneuver similar scenes, they showed me that inexperienced players weren’t the ones at fault. For them, the offer was still a gift and they twisted it to their advantage. It was a total mind shift. What if there isn’t such a thing as a difficult teammate?

In hindsight, I could have chosen multiple scenarios to change my character’s path [see #5], but I blamed my teammate instead. I had just as much control as he did. In the end, we all have the power to change our destiny. We can’t change what someone offers us, but we can change what we do with that offer.

Don’t Be Afraid to Die (on Stage)

Part of being a good improviser lies in knowing when you’re needed. Sometimes the strongest statement you can make is by not saying anything. It’s difficult to hold back. As a performer, you would think “Oh, I need to be on stage! I need to say something! A joke? Blah! Blah!” Not coming into a scene, leaving a scene or killing off your character may be exactly what the scene needs. The strongest improvisers know how to self-edit. They understand what the scene needs and if it means their character needs to die, then RIP my dear friend.

At work, adding information that does not resolve the issue at hand can throw off the meeting into another tangent. The meeting goes off course and the initial issue is never addressed again. By the end, the purpose of the meeting hasn’t been resolved and the meeting has taken twice as long. Not to say that you shouldn’t bring up other issues, but there is a time and place.

Loud and Proud, Wrong and Strong

Ever have an idea, but didn’t want to speak up because you were worried about being wrong – public embarrassment, scrutiny, and the overwhelmingly crushing feeling of failure? Making mistakes is okay, it’s how we learn. Be confident in your decisions, even if they turn out to be the wrong ones.

A improviser is making multiple decisions at the same time, while listening to their scene partner who is also making multiple decisions at the same time. It’s easy for a scene to remain stagnant. No one wants to make a choice and no one wants to give an offer. They’re afraid of making a mistake on stage. But if no makes a decision, all improvisers lose on stage. Someone needs to make a choice, a clear one, to move the scene along.

As an example, two improvers establish a scene that they’re in an office, discussing their weekend plans. Another player comes out on stage, sits down, faces the audience and says, “Here at the City of Seattle Power and Electric Company, we believe in a strict work/life balance.” Then, one of the players in the office says, “Look at the time. Well, that was fun. I will see you in exactly 5.5 hours to discuss our hobbies.” The incoming improviser, now the narrator of the scene, made a strong choice. He set up a scene that they are now inside an HR video for the City of Seattle. He was articulate and confident, and the other improvisers supported the teammate. If the new improviser came out and was hesitant, the teammates might not have heard their teammate or even seen them on stage. The teammates would have continued to talk about their weekend plans, while a player was left stranded on stage.

If you’re going to make a decision, be clear, be confident, be strong. Even if it’s the wrong one, you and your team will have learned something.

“Mistakes” is the word you’re too embarrassed to use. You ought not to be. You’re a product of a trillion of them. Evolution forged the entirety of sentient life on this planet using only one tool: the mistake.

Two years later, improv has become yoga for my head. I’ve started to apply the lessons that I’ve been taught in my personal and work life. It forced me to improve how to work in a team, communicate with others, and handle roadblocks.

The improv scene is a large community of people who are all working towards becoming better teammates. The audience watches a great performance and assumes that the reason is how funny the performers are, but if you watch closely, they understand the fundamentals of being great teammates – present, listening, and knowing when to shut up.

1. The Seattle Freeze refers to a belief that it is especially difficult to make new friends (particularly for transplants from other cities) in the city of Seattle, Washington.

3.“Did they just say that kittens are running their social media? What are the kittens doing? Are they writing blog posts? What are the blogs about? How could social media outreach go down when it’s run by kittens? How long have I been on this tangent? Is the same scene still going on? They’re talking about milk now?! But where are the kittens?!! Oh, I miss Mr. Whiskers. He was a good cat.”

4. Replacement for a derogatory word. I wouldn’t mind being called a panda. They’re cute and would take it as a compliment.

5. Potential scenes I could have chosen: