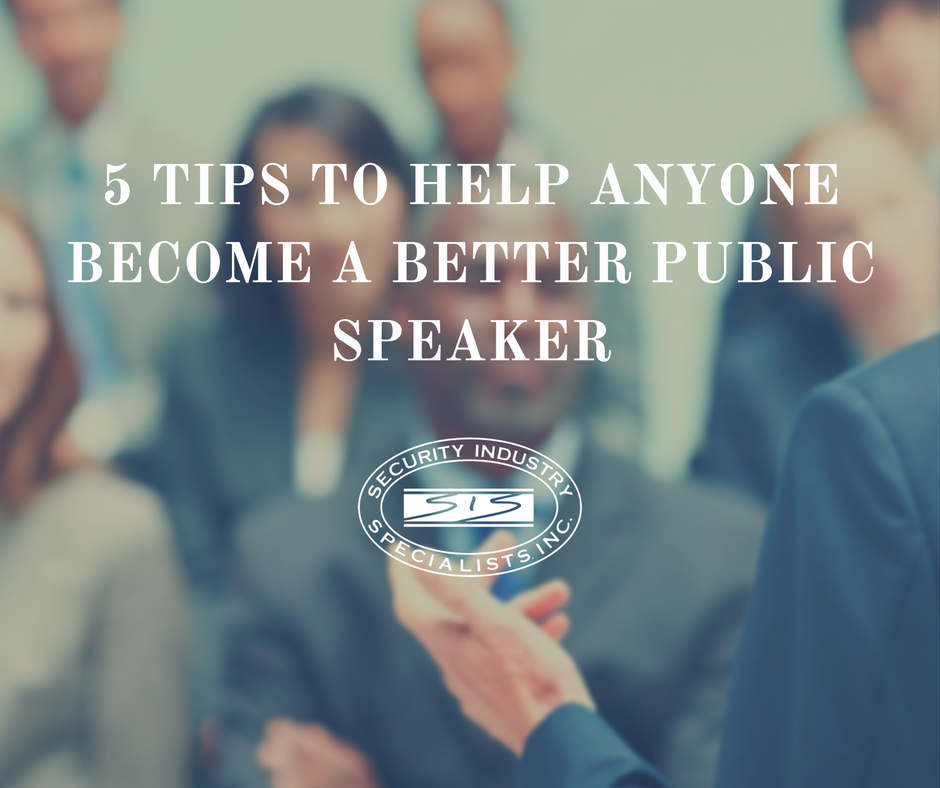 5 Tips To Help Anyone Become a Better Public Speaker

“According to most studies, people’s number one fear is public speaking. Number two is death. Death is number two. Does that sound right? This means to the average person, if you go to a funeral, you’re better off in the casket than doing the eulogy.”

Whether you are an SIS Specialist speaking with clients, a Supervisor preparing to lead one of the presentations put together by SIS’s world-class Training Department, or a Director about to step in front of your entire team for a quarterly all-hands meeting, you’re going to need to overcome your fear of public speaking. These 5 tips are designed to help you out. I’m not promising that you won’t be terrified, but you will be able to relax afterwards knowing that your message was received positively.

One of the most common ways to lose your audience is to tell them something they already know. Many well-intentioned lectures dig their own grave in the opening remarks. To correct for this, I like to begin with a statement and a census. “Today we’re going to be discussing limericks. Who knows what a limerick is?” And depending on the venue, you can press forward: “Can anyone recite a limerick?” Their reaction will let you know how well-versed (pun intended) your audience is in your subject.

Don’t just ask. The takeaway here is to communicate to them that you are tweaking your lecture to fit their knowledge base. If you respond to them, they will respond to you.

This is a seemingly simple step, but it can save you that dreadful feeling of speaking to an empty room.

Which leads us to topic No. 2…

2. PRESUME THEY KNOW AS MUCH AS YOU

Don’t let conventional wisdom and sitcom stereotypes fool you: nobody likes to pretend to be dumb. Give your audience the opportunity to be smart and they will surprise you!

The brain likes to catch up. For instance, I know nothing about cars. When my friend tells me about repairing his diesel engine on the side of the road, the point he’s trying to make is that he solved the puzzle of the leaky tube. Was he teaching me to be a diesel engine mechanic? No. Did he let my total engineering ignorance get in the way of an interesting story? Also no. And that’s the point.

Don’t get lost in the weeds. Those in the audience who are conversant in the subject will appreciate being treated as equals. And those that, like me, are unawares but perfectly capable of following along will be more engaged. You can even make a joke of it: “So we all know that corrugated cardboard was invented in 1856 to be used as a lining for tall hats, right?” Or you can give a courtesy warning: “We’re going to get a little esoteric here, but I promise you’ll be able to follow along.”

During our New Hire Orientation, we refer to our 3-Day Training Program as a “firehose of policy and procedural information.” None of us speaking expect a Specialist to understand our intricate surveillance network on their first day. But we do expect them to be able to use a radio. The key is to never dumb it down. Let the audience select what they deem to be the most important information. Even though they won’t remember everything about the massive deployment, they will focus on two things: 1) What they need to do, and 2) There’s a lot of other people also doing things. That context will edify their memory and their integrity. This is much more effective than simply telling somebody to do something and “a lot of people are relying on you.” Let them come to that understanding on their own. 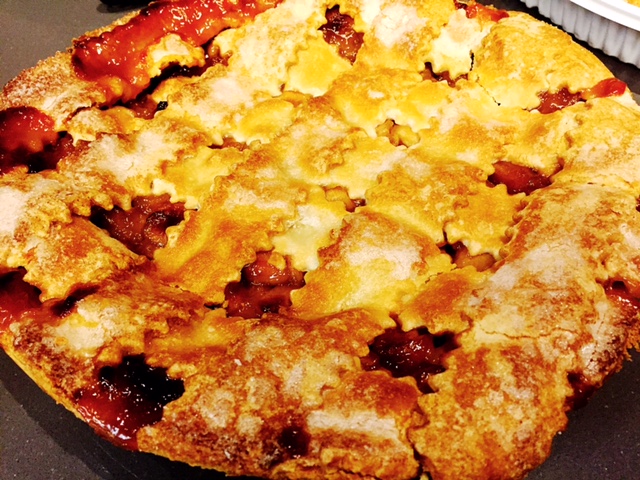 I’m going to teach you how to frame your message. This tip is one of the oldest in the industry, yet it’s not well known to amateurs. You may be naturally charismatic, you may have your audience engaged from beginning to end, but if you want your message to stick, you need to book-end each topic. For instance: “I’m going to tell you how many moons Jupiter has. Jupiter has 67 moons. Now we know that Jupiter has 67 moons.” This is extreme example, but we are learning how to frame the message.

My favorite practical example of Framing the Message is any pie recipe. There will be a list of ingredients that you need to begin, but then the recipe breaks down the ingredients and procedure for making the crust and it does the same for the pie filling. Think of your message in the same manner. The thesis is a delicious, fresh-from-the-oven pie. But that is made up of smaller messages like “crust” and “filling” and “oven temperature”.

If you don’t frame the message, it’s just like mixing all of the ingredients together and hoping the end product looks like a pie.

Not only does it help with retention, this tip also solves two issues amateurs face when speaking in front of crowds. Those with stage fright usually don’t know where to begin. Well, now you know. Start with, “Here’s the topic I’m going to talk about.” It’s not eloquent, but it is useful.

And those who tend to ramble now know to insert breaks in their speech. If it’s been awhile since you’ve said, “We’ve now covered _____,” then you know you should take a pause and reiterate what you’ve just said. And before you continue, begin your next sentence with, “And now we’re going to discuss _____.”

The most wonderful benefit of this technique is that you are filing away each topic in your audience’s head like a Table of Contents. At the end of the lecture, you can say, “We’ve covered the size of Jupiter, the moons of Jupiter, the size of Titan, the atmosphere on Titan,” etc., and you will be not only edifying all of those new messages, but you’re also teaching the audience how to quickly activate that memory.

And now you know how to Frame the Message (see what I did there?)

Seriously. Make eye contact. It’s easier said than done, I know. But do it. And not just a few people. Every single member of the audience. Unless you’re Beyonce playing to 30,000 people. That would be impossible to do (but she’s Beyonce…if anyone could do it, it’d be her.)

The human eye is remarkably adept at following another person’s gaze. Everybody knows you’re just scanning the crowd and not connecting.  If that’s your style, you may as well have your eyes closed.

Your body language changes when you are looking somebody in the eye. For just that moment, you’re addressing a single person, which you might think would take away from the others. In fact, it makes you more relatable for the rest of the audience.

Have you ever been in an audience when suddenly the speaker locked eyes with you? Didn’t you sit up in your chair and start listening? There’s no better tool than eye contact to make sure everybody is engaged than to simply look.

Practice. When you’re at a restaurant, look the server in the eye while you order. Ask a question about the menu and keep looking them in the eye. Count to five. Try to get five consecutive seconds before you look away.

Caveat: If you’re speaking to a crowd of more than 150 people, chances are you will be on a stage with lights in your eyes; you will be functionally blind. At this point: fake it. Imagine three or four individual people sitting throughout the crowd, and imagine you are making eye contact with them throughout. (This sounds crazy, but it works.)

If it’s written down, let them read it. If you’re going to say it out loud, don’t write it down. If you’re using a slide deck, or a training manual, or a chart, the words should be clear enough for everybody to read.

Now, there are a few exceptions to this: headings, titles, phrases, etc. If you’re teaching somebody how to bake a pie, and your presentation has the words How to Bake a Pie, I’m not telling you you can’t say that sentence out loud. What I would suggest you avoid is the terrible habit of turning your back to the audience and reading from the presentation. To that end, if you want to put a paragraph of text on a slide and say, “Go ahead and read this,” you can do that. Some people retain information more efficiently when they’ve read it. This will give your voice a break and it will change the tempo of the presentation.

“Wait, I thought there were only going to be 5 tips?”

I like to use humor–usually non-sequitur–to keep my audiences engaged. End a segment of your talk with something completely unrelated to what you were just saying, like, “And that’s how peanut butter was discovered.” Those that were paying attention will give you a funny look and those that had just lost focus will realize you baited them and laugh. It works.

The long and short of it is this: humans aren’t designed to sit still facing one direction for long periods of times. Every public speaker faces this obstacle. Don’t beat yourself up if one or two people are clearly not paying attention. I’m going to go ahead and argue on their behalf that they’re trying to pay attention but they are simply tired.