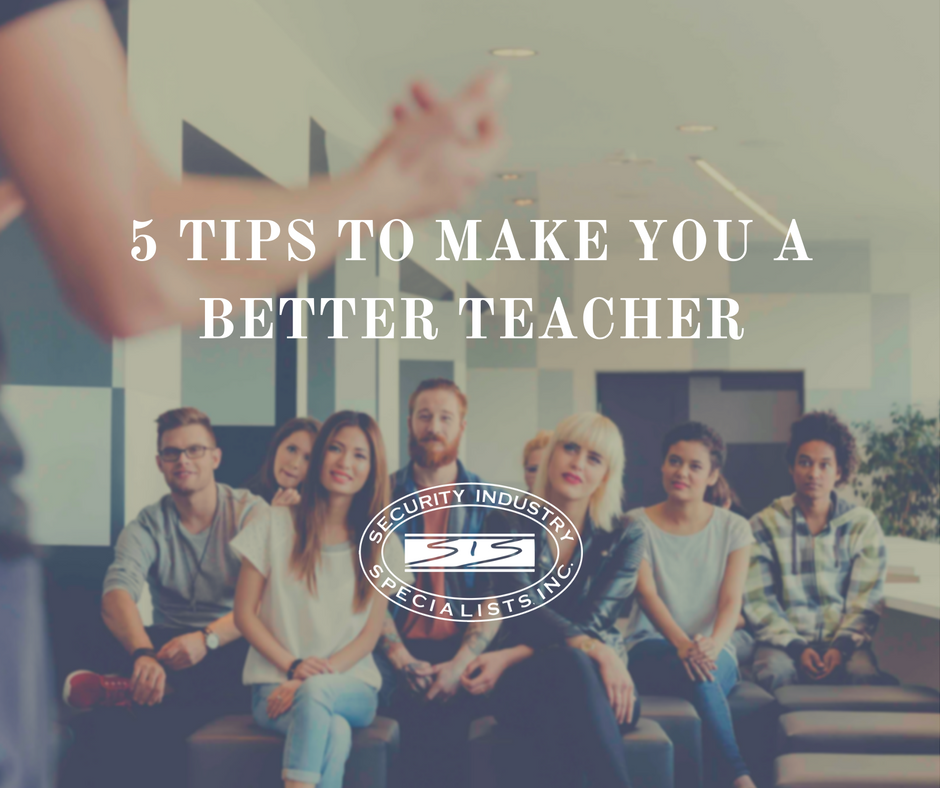 5 Tips To Help Anyone Become a Better Teacher

Other than the typical stage fright, the hardest part of standing in front of a room of people and teaching them anything is that they are going to ask you a question that you do not know how to answer. No matter how prepared you are, this is going to happen. A room full of people sitting through a mandatory training is nature’s finest chaos engine.

No longer fear the inevitable; turn it into your lesson plan! Below I will detail 5 tips to help anybody become a better teacher. The short version is this: you’re going to be asking them a lot of questions that they won’t be able to answer and they’re going to be doing the same to you. A classroom should be a place where teachers and students come together to answer questions together.

I don’t mean “plug in your laptop and make sure the videos work.” Of course I don’t, because the videos never work. They’ll work one thousand times in rehearsal and fail the first time you put them in front of  an audience. When I say “set the room,” I want you to think like a maitre’d thinks, or a stage director, or a flight attendant. The students are going to be here for a while; are they going to be comfortable? Is the environment conducive to learning? Go, sit in one of the seats.

Is it too bright? It is cold? Is it comfortable to glance between the presentation and the speaker? Is it easy to move around the room? To get up from the seats? All of these questions will alter how you teach the class.

Rearrange the furniture if you need. If you plan on having an in-class exercise, but the desks or tables are awkward to get up from, move them!

If you’re relying on a screen for your slide deck or video, then turn down the lights. No student wants to sit in a brightly lit room staring at a bright screen. Their eyes will be fatigued long before their mind. If you are showing a video, set the room brightly for the introduction, then turn down the lights for the video. This creates an aura of preparedness and hospitality that will help the students lower their guard.

Here’s a micro-tip: know how to turn the lights down before the students arrive. When you walk into the room for the first time: fiddle. Fiddle with the blinds, the windows, screen, the lights. Don’t try to purposely break anything. But trust me, if a student asks if you can close the blinds and they turn out to be remotely-operated by a panel on the far wall, you’re going to want to know that in advance. If you fumble with a small thing like that, as unfair as it is, the students will think: Oh, this teacher doesn’t know anything.

Every salesperson knows this one. “What’s keeping you from buying this car today?” Their answer will take about two or three seconds. That’s fine. Because you’re going to ignore their first answer while you count to seven. By the time you get to seven in your mind, they will have begun talking again. People don’t like silence, so they begin to fill it. In a sales environment, this process is slightly more adversarial. Luckily, as educators, we’re on the same side as the students. So we use the power of Seven Seconds of Silence for good.

“Who can tell me the name of the guy who wrote the Constitution?” And now count to seven. Here’s the funny thing about most people. If they know the answer, they won’t speak up. They don’t want to look like a know-it-all, or seem to be mocking those that don’t know, or they might feel that the question is obvious and therefore beneath them. Most students are politely disinterested. Then there are those who are only half-certain and don’t want to risk being wrong. And of course, some simply don’t know the answer. And finally, there are those who haven’t been paying attention and couldn’t repeat back the question if you offered them five thousand dollars to do so. The Seven Seconds of Silence affects them all equally.

The bright but polite crew will eventually answer once it becomes clear nobody else knows. The half-certain crew might take a guess. The people who don’t know will most likely crack a joke or say they don’t know. And the oblivious ones will notice that the room has gone silent and they will suddenly be fascinated by what’s happening and terrified that you’re about to call on them.

Here’s the trick. Don’t call on anyone. Just wait. Somebody will say something, the rest of the class will be thankful the silence has been broken, and they will now know that you are capable of restraint. The next time you ask a question, it might take seven seconds again, but by the third or fourth question, they will know they *have* to participate to keep the class moving.

The question was: “Who wrote the Constitution?” After seven seconds of silence, somebody in the class says, “Jefferson.”

“Great guess! You’re close. It was a friend of Jefferson’s.” And now seven more seconds of silence.

Another trick is to take their wrong answer and make it the right answer to a question you didn’t ask. “Jefferson was a prolific writer of the time. He wrote the Declaration of Independence and a series of essays. But it was another early president who wrote the Constitution.”

It is so much easier said than done. It takes some verbal gymnastics to pull off sometimes but it is important to make sure everything you say to the students is framed positively.

Okay, not everything. You have a slide deck and videos and pre-printed charts for a reason. But, what do you think—and there are no wrong guesses—is the major difference between a whiteboard (or blackboard for us older folks) and a computer screen playing a slide deck?

You don’t have to answer now. We’ll circle back.

Here’s something I’ve been experimenting with lately. At the top of a class, I will grab a marker and stand at the whiteboard and say, “We’re about to discuss emergency response. What are your questions?”  And then I’ll stand there. #sevensecondsofsilence  You can encourage them a little bit by saying, “Nobody has any questions about our specific emergency procedures?”
Once they start asking, you start writing. Write every question on the board, complimenting each question. Fill up as much of the whiteboard as you can. “There must be more questions out there. We have lengthy emergency response SOPs. If these were the only questions we covered in the SOP, it’d be three paragraphs long.”

Make a game of the white board, too. “Come on, let’s fill up the board! There’s enough space over here for at least two more questions.” This is also a great way to gauge how much your class understands the material already. Which ties into my suggestion from the last post that you presume they know as much as you.

Okay, now that you have a bunch of questions on the board, and this is going to sound weird, don’t answer them! Restraint is important.

Remember when I asked at the beginning of this section what the difference is between a whiteboard and a slide deck? I’d like to tackle that now. The difference is that a slide deck is deliberate, rigid, pre-planned. No matter what the students say or do, that presentation is on rails. In contrast, a whiteboard full of questions is something you’ve built together. You can still proceed through your lesson plan in the exact structure that you’ve prepared, but as you do, put a checkmark next to each question on the whiteboard that you’ve answered. This gives the class an improvised feeling. It’s much more satisfying for the class to see that their work (coming up with the questions) is being rewarded (answers) and respected (guiding the class).

Even if you don’t use the Massive List of Student-Created Questions as Lesson Plan (MLoSCQaLPTM) technique that I invented a few weeks ago, I still encourage you to create a “parking lot” on your whiteboard. It’s easy. Just draw a line on your board, and write Parking Lot above it.

I told you it would be easy. Now, every time somebody asks a question during the class that isn’t directly related to the topic at hand, write this question on the board. Encourage the questioner with something like, “That is an advanced concept. We’re not quite there yet.” And then, once the lesson approaches that topic, refer back to it. Much like the MLoSCQaLPTM, this fosters a rapport between student and teacher. It demonstrates that the teacher is listening, the students are helping to steer the class, and it serves as a visual milestone. So don’t answer every question right away! It’s important for the class to have a few unanswered questions.

Also, here’s something I encourage our Field Training Specialists to do: Pretend to not know the answer to a question or two each day. It sounds crazy, right? You think people value those who know everything, right? That’s why we are teachers, right?

Well, no. A teacher is a facilitator and advocate. One thing people value much more than a wealth of knowledge is follow-through. At SIS, the FTSes are a designated resource to edify our widely-distributed team of Specialists. They train every single day; in briefings, at posts, wherever they interact with the Specialists. The Specialists like that they can ask the FTS team anything. But what I want to encourage is for the FTSes to say, “Let me look into that and get back to you” every once in awhile. Because when that Specialist comes to work the next day, and the FTS comes up and says, “Hey, I found out who wrote the Constitution,” it will not only help the Specialist remember, it will inspire the Specialist to continue asking that FTS for help.

By the way, we can cross it off the Parking Lot now: the Constitution was written by James Madison.