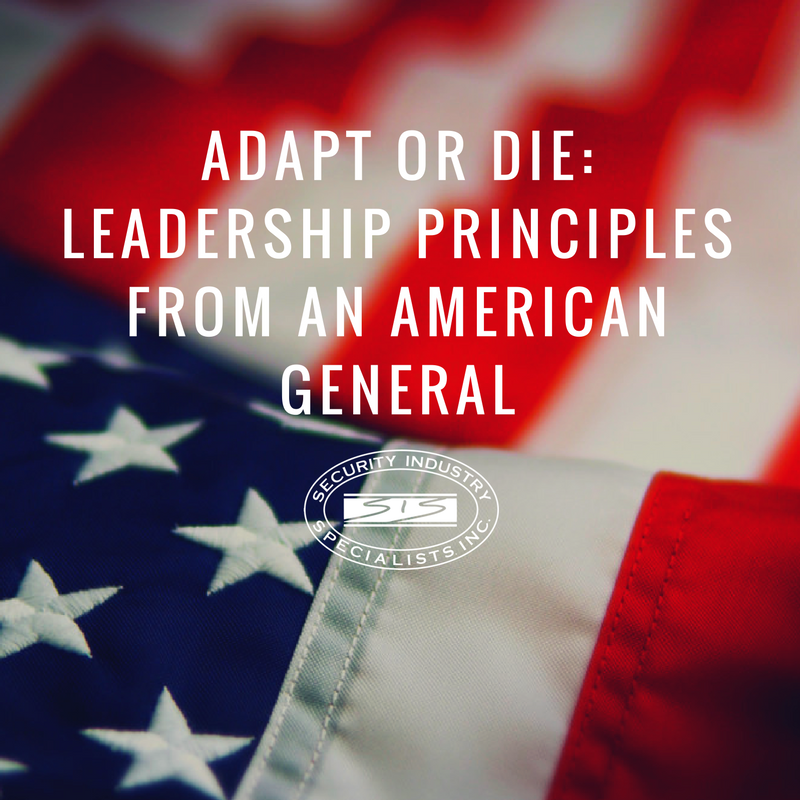 Adapt or Die: Leadership Principles from An American General

Last Memorial Day, my wife (and fellow SIS employee) Leslie and I made our annual visit to the Los Angeles National Cemetery for the ceremony to pay our respects to the servicemen and servicewomen that have sacrificed for our values and freedoms.

This year’s special guests were members of the Tuskegee airmen and keynote speaker Army Lieutenant General (RET) Rick Lynch.  Lt. Gen. (RET) Lynch commanded at all levels of the Army from 100 soldiers to corps of 65,000 soldiers.   He spent a total of over thirty months in Iraq, including fifteen months as one of the leaders of the 2007 surge.

When Lt. Gen (RET) Lynch stepped to the podium, he paused and said “I’m not worthy of this honor.” He stepped down and walked to where the Tuskegee Airmen were seated, humbled in their presence and said “You sirs, are deserving” stood at attention and saluted.  It was as sharp of a salute you would ever see.

He spoke of family, faith, country and service.  He mentioned meeting soldiers who would come up to him and say “I served under you in Iraq, but was only a soldier.”  He would correct the soldier saying “We’re all soldiers.” Rank didn’t matter to him, service mattered to him.  Leslie and I were so moved by the general I had bought his book Adapt or Die: Leadership Principles from an American General by the time we had arrived back at our car.  I thought I would share some of his principles with you.

Leading is much more than just “managing.” Manage by Walking Around (MBWA) isn’t a new concept to SIS.  If you want to know what’s happening, you need to get out and walk around. Lead where it counts: among your people.

Engaged leadership is more than just Manage by Walking Around, but one giant leap further.  It’s not enough just to see your workers in the workplace.  You need to engage them in their lives.  Get to know them. Get to understand them.  Let them know you care, not just about their output on duty, but that you truly care about them as people.  Once that’s established, you’ll find that your people are not only working for you, they’re working with you. There is no stronger place a leader can lead from.

One rule Lt. Gen. (RET) Lynch talks about is don’t walk by anybody without addressing them by name.  On the one hand, it’s just a nice thing to do. On the other, it’s a shrewd thing to do.  Studies have shown that you can improve service by 80 percent if you address people by their name. Why would you want to miss that opportunity, in work or life?  To not do that is the opposite of shrewd, not to mention the opposite of how we should be treating our fellow human beings.

As a leader, personalizing your communication with them is just the tip of the iceberg when it comes to caring for your people.

Every day your staff has a decision to make: Do they simply do their job, or do they do their job to the absolute best of their abilities? When people know that their leaders and managers have their best interests in mind, they will work harder; every time.