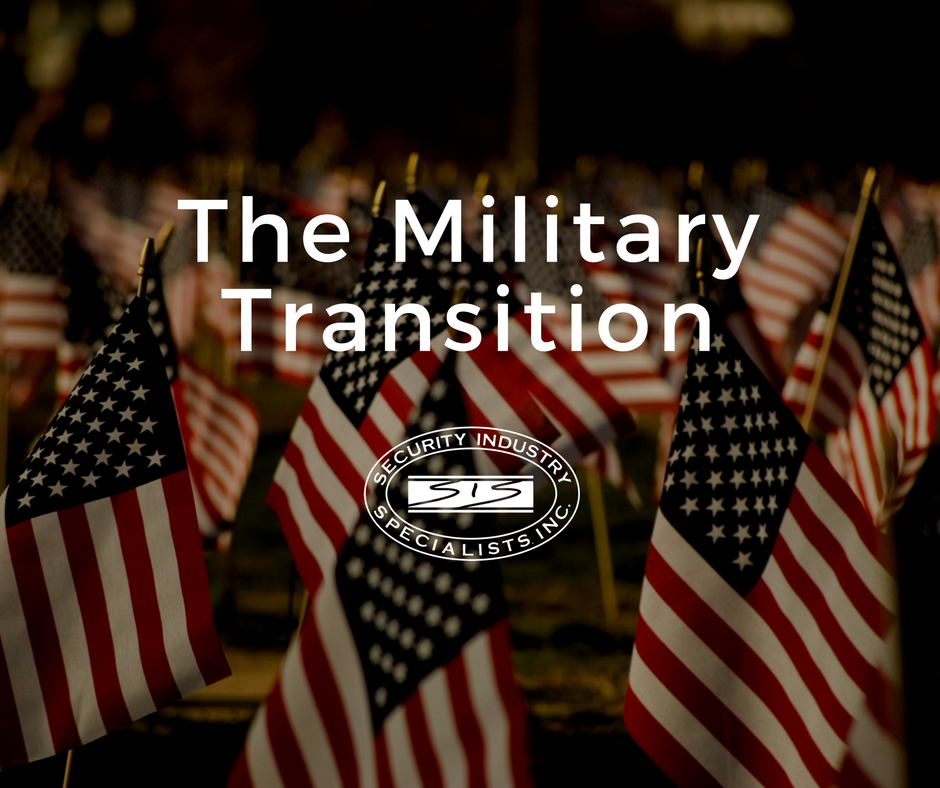 The Military Transition: From the Service to Security

No one will stay in the military forever. Whether a person decides to leave after their initial contract ends or after 20 years when retiring, it’s an inevitable fact that everyone will go through the transition process all the same.

There are some that will have an easier transition than others, with some being able to fall back on their retirement. Regardless of the means, it is still a nerve-racking and daunting time in a person’s life. More time in the military usually means an easier transition when going into the civilian workforce, but this is not without challenges. Many do not fall directly into a role equivalent to their position in the military or start at the same pay rate.

I made the choice to leave the military a little past the halfway mark for retirement and was met with challenges and naysayers. At around 8 months from my end date with the military I arrived to my new unit from Korea and was almost immediately thrown in as the Non-Commissioned Officer in Charge (NCOIC) of my section. As luck would have it, my new unit was the most disorganized one I’ve been in. I was always busy, working late, falling further behind with my transition preparation and all the while having most of the military “lifers” telling me about how I’m “halfway to retirement, just stay in”, how “hard and cruel” it is on the civilian side and how “everybody is just out for themselves” in the corporate world.

I eventually realized that as obligated as I felt to work hard and be a great asset to my unit, my unit would continue to go on without me if I decided to leave. I was assertive yet tactful when speaking to my chain of command about needing to let go of most of the responsibility I had, and started preparing the person under my command to get ready to step up. During the next few months before my end date, I revised my resume a dozen times and sent it out, and went to a number of different career fairs. As time kept passing by I admittedly did reach a point where I felt like I made a mistake and would not be successful, but I continued to push forward.

It was during a networking event that I met with the Senior Manager of Talent Acquisition at Security Industry Specialists (SIS.) They were looking to fill a position that I happened to be a good fit for. I honestly never considered  working for a security company or even had the desire to, thinking that they were all the same, but when I was talking to the recruitment manager, I realized SIS is something different. He went into the different types of work SIS  does, the professionalism, the company culture — I realized that this is a place where I could envision my new career. I was hooked. I still had to submit my resume, and go through all the interview processes.

I realized that this is a place where I could envision my new career.

Right after my final interview with SIS,  I received an interview from a company in another field of work that I was interested in  — the position even paid higher wages.  I ended up declining the second interview with the other company and accepting the offer with SIS. What sold me was the company itself. The first time I went into SIS’s corporate office, I didn’t get any sense of the cruel, cutthroat work environment that I was warned about by the military lifers. I was greeted by genuinely nice employees and heard people laughing and joking around, similar to the way I’d hear soldiers joking around with each other.

The military transition can be challenging to anyone, from a Private to a Colonel, but it can also be successful for anyone. Below are some of a few key things I attributed to my successful transition.

Ø Hustle: The chances of a great job coming to you without any effort is slim to none. Whether you’re an extrovert or introvert you’ll need to put yourself out there, network with as many people as possible and sell yourself to potential employers. Identify your strengths and make people realize why they should hire you.

Ø Relate Your Skills to the Corporate World: Going through Special Forces training or being on a QRF team in Iraq is great, but that doesn’t correlate to anything in business. The skills you pick up like leadership, strategic planning, teamwork, critical thinking, quickly adapting to shifting priorities, does. Take some key experiences or accomplishments and work to translate them to the corporate sector.

Ø Don’t Have Too Many People Critique Your Resume: People that help with your resume have the best intentions, but if you ask 10 different people you’ll get 10 different opinions. Stick with a simple format you’re comfortable with and take some sound advice from a couple of different people so you’re able to edit it easily.

Ø Accept The Fact That You’re Not A Shining Star: Yes, you were a great leader and have years of experience and discipline to get any job done successfully, but there are other people like that too. Even if you’re going into a role similar to what you did in the military, the processes and systems in place are different. In addition, you are competing with internal employees for positions, and they already know how the company operates. It’s okay to strive for and hope to get a position equivalent to what you did in the military, but don’t expect it.

For anyone transitioning out of the military, know you’re not alone in your challenges. The saying “persistence is key” holds significant weight in regards to your success.