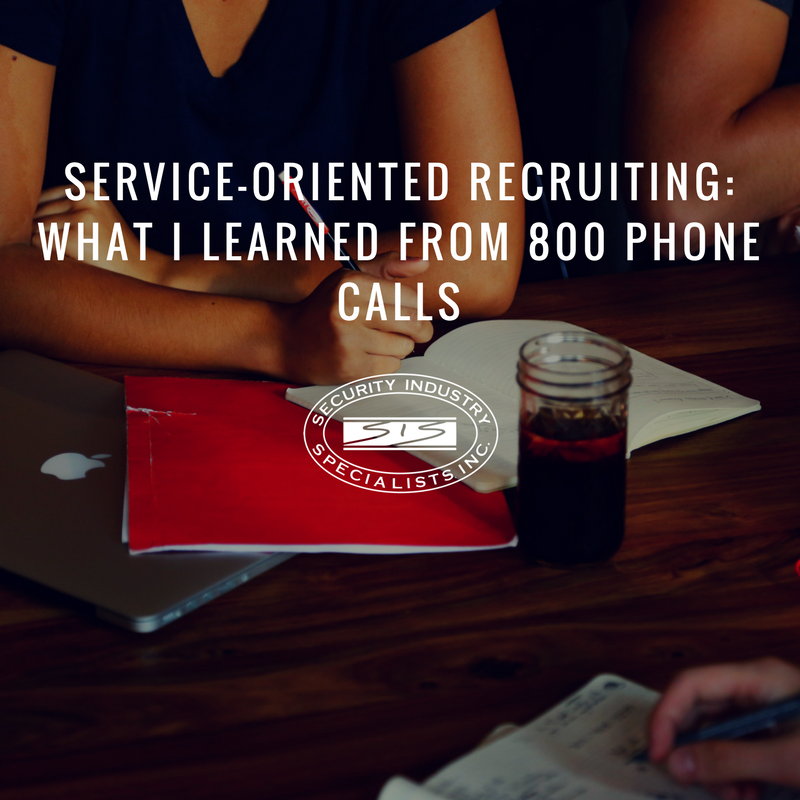 Service-Oriented Recruiting: What I Learned From 800 Phone Calls

It was early March when I received an email from my boss that there was a tech event in the Bay Area I had vaguely heard of that would require attention from additional offices. Little did I know at the time, the vast majority of my job for the next 3 months would consist of staffing for that event. The expectation was to hire 200 Security Specialists. And with a challenging labor market, the necessity of a guard card, a 3 shift-a-week minimum and a job that was temporary, it felt like the deck was stacked against us. Perhaps it was. Either way, that event begins today, and it begins with a fully-staffed security team.

It was pretty early on that I realized that the event would demand a large amount of effort for a relatively small return. Because we needed to hire more people than the amount of applications we were receiving, our recruiting effort required “passive sourcing”, which mostly meant reaching out to people who posted their resume on job sites and fit the bill for the role but hadn’t actually applied to it. Not surprisingly, the interest-level within the passive candidates wasn’t exactly overwhelming.

About a month in of high-volume calling, a large amount of “no’s” and a long-stretch that remained, I was feeling burned-out. It seemed as if I was spinning my wheels, working hard but not having much to show for it. I decided that I needed to take another approach. I had to garner as much as possible from the calls that I was making. And I realized that I needed to pick my head up and take a look at the big picture. I was talking to more people than I ever had before – oftentimes to people who had little to no knowledge of SIS – and so with that, came a branding opportunity. I wanted to make the interactions I was having as meaningful as possible – for myself, the candidate, and SIS. I could do that through exceptional service.

When a candidate asks to cancel their interview due to finding another job, you congratulate them. When you discover that a candidate does not have a Guard Card, you send them information on how to obtain it. Oftentimes the location of the event was outside of the candidate’s ability to travel to. So what better way to wrap up the conversation than by directing them to SIS’s careers page so that they could look for openings closer to home?  By providing that extra level of service to candidates, I was able to turn a conversation that could have been fruitless into one that could produce value for them, create a sense of reward for me, and make a good example out of SIS.

An example I can personally share that demonstrates the value of service-focused recruiting came from a candidate who we found on Indeed. I reached out to Ryan in March and we couldn’t seem to align. Six weeks went by and I reached out to him again. I came to find that he did not have his Guard Card, so I sent him the state requirements and a link to the third-party provider we use to provide the training. Ryan ended up doing research on our company and realized his work experience fit the Recruiting Coordinator opening in San Jose. He applied and interviewed for that role. Next week, he starts work with us.

Being a service-focused recruiter is not only the right thing to do as a human, but in the ultra-connected world that we live in today, it is essential. Just because you are not making much headway in filling a job does not mean that you are not creating the impression you want for your employer, an impression that will live well beyond the life of that opening. It is with that spirit that a Recruiting Manager will stand post to keep a promise to a client, or a CEO will spend hours on end hand-signing birthday cards for thousands of employees (both happen at SIS.) These may seem like small acts, but they have a large impact. In the end, hiring for the event came slow and steady, but it came. I am happy that I could be a part of it.