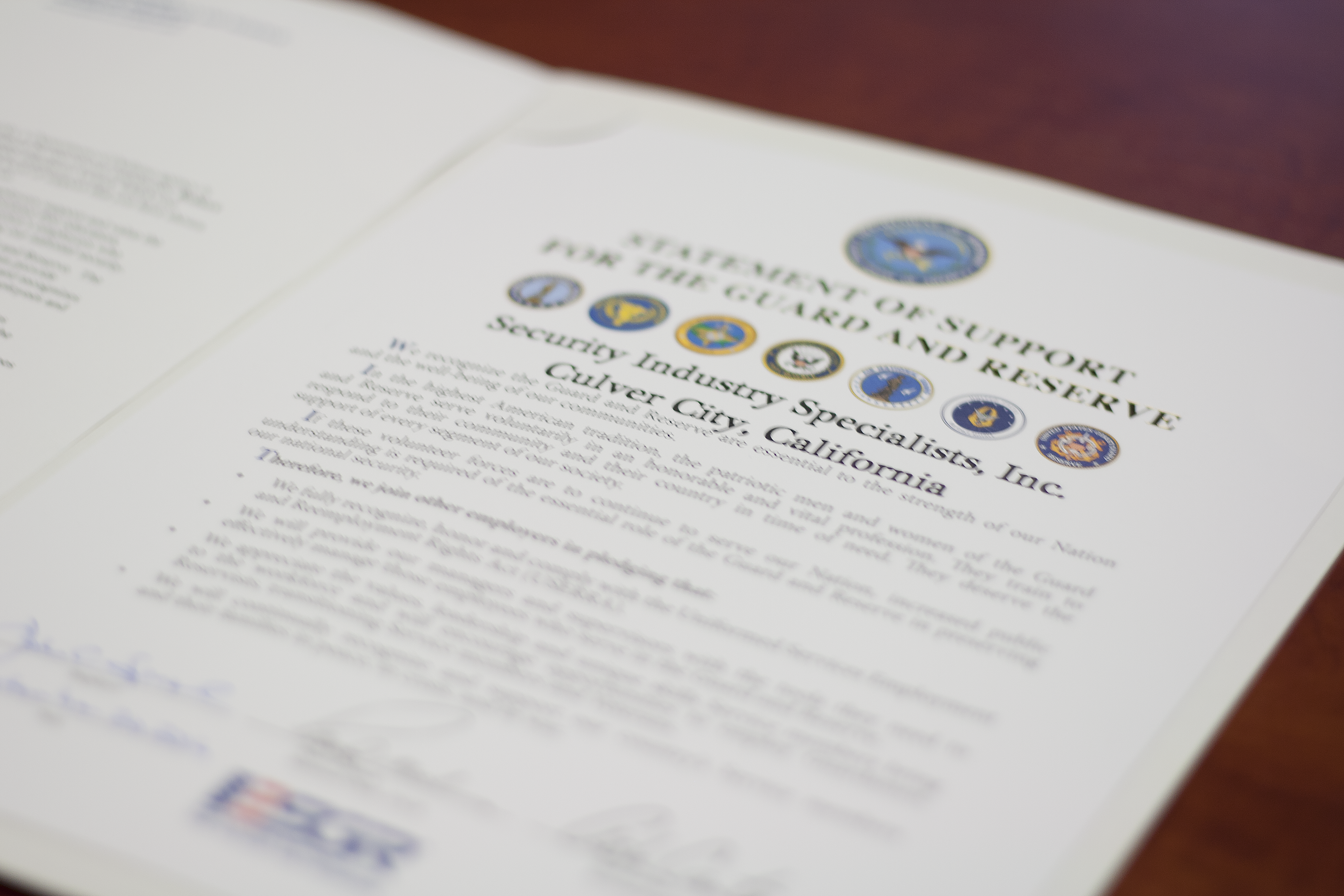 On Tuesday Sept 20th, Ernest Cowell, from the office of the Department of Defense Employer Support of the Guard and Reserve (ESGR), presented the “Patriot Award” to John Spesak and Tom Seltz, recognizing SIS for supporting employees that serve in the reserves. 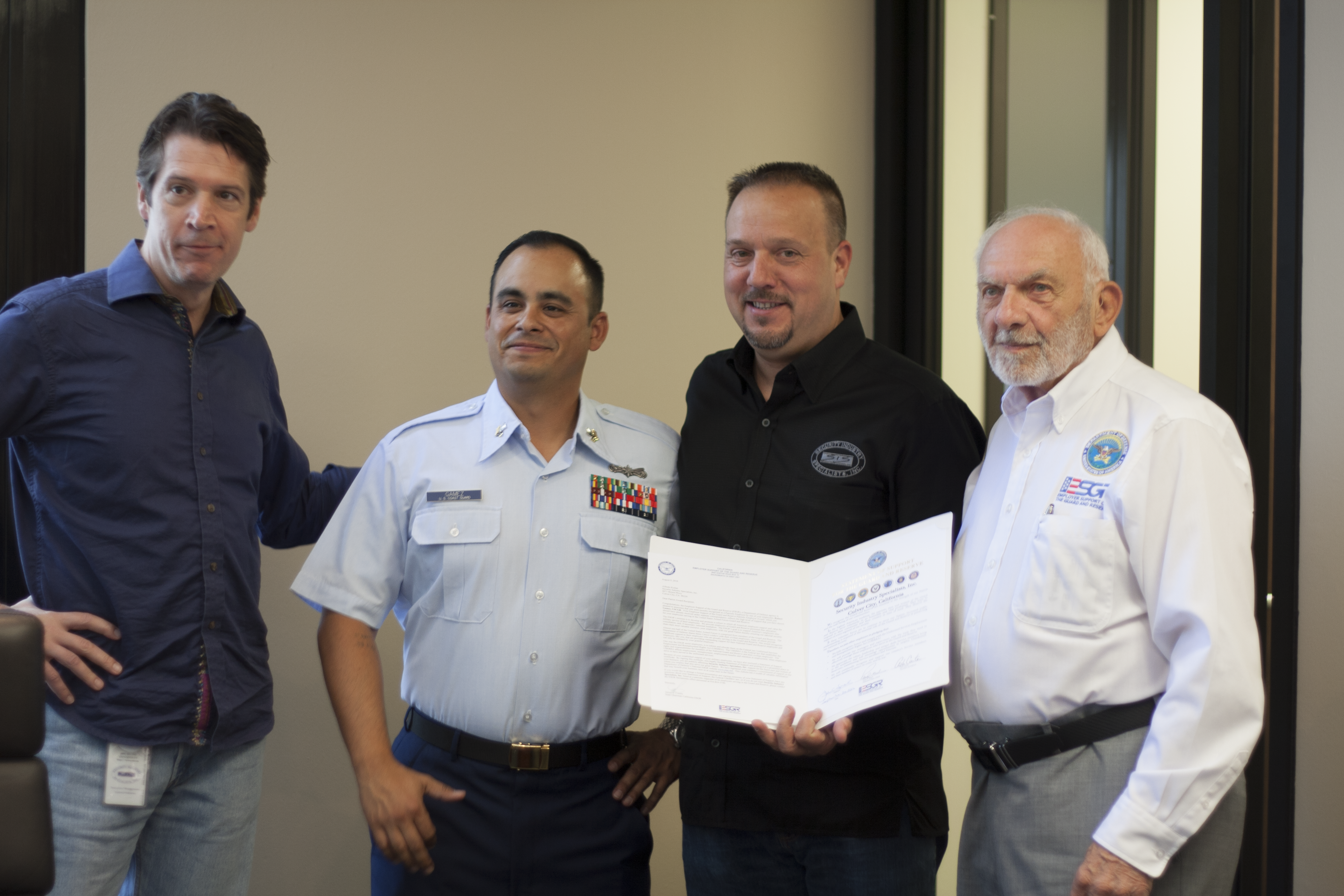 Reservists are highly motivated men and women who are dedicated to the defense of the nation and who reflect the diversity of the nation in many ways. In general, Reservists have the same duties as their Active Duty counterparts: they provide invaluable expertise, experience and leadership; they deliver critical support to global operations and planning. Reserve service is generally associated with part-time service. What all Reservists have in common is a commitment to serving a minimum of one weekend a month plus two weeks a year.

Rob Gamez, training coordinator, nominated SIS and his supervisor Alfredo Kuilan for the Award for continual support of Rob’s service in the US Coast Guard reserves. Rob is currently assigned to Port Security Unit 311 in Long Beach. Port Security Unit (PSU) 311 is an Expeditionary Warfare Unit designed for rapid deployment and sustained operations to provide OCONUS port security in support of regional combatant commands. Port Security Unit 311 in Long Beach is capable of immediate recall and can be anywhere in the world, mission ready, within 96 hours to provide waterside and shoreside protection to key assets, such as pier areas, high value vessels, and harbor entrances. The unit typically operates in foreign waters as part of a Naval Maritime Expeditionary Security Squadron supporting the Naval Coastal Warfare mission; however, they can stand ready to support operations in U.S. territorial waters as well.

Mr. Cowell, who presented the award, is a former business owner who specialized in lighting engineering design. He served the United States heroically during three foreign conflicts. In WWII, he served in the 6th DIV, 20th Army Infantry. Continuing his service with the Navy, he was assigned to a destroyer and carrier group during the Korean War. Finally, he served on the USS New Jersey during the Vietnam war. He has volunteered as the President of the National Cemetery Support Foundation, as well as for the Los Angeles, Naval Cadet CO., the LAPD WLA Div., and ESGR, with over 20 years of service for each. He is a member of the Fleet Reserve Association, American Legion, Navy League of the US, and Freedoms Foundation of Valley Forge. He says about this work, “The total sum of income from it all, ZERO, but I do have fun working with people!”

Support of the Guard and Reserve makes it their mission to develop and promote supportive work environments for service members in the Reserve components. They do this through outreach, recognition, and educational opportunities that increase awareness of applicable laws. The Patriot Award is just one example of these outreach efforts.
The Patriot award reflects effort made by patriotic companies to support citizen warriors through a wide-range of measures, including flexible schedules, time off prior to and after.

Founded in 1999, Security Industry Specialists, Inc. provides unique security solutions to Fortune 500 luxury brands and tech companies, special events, and high-profile executives. With corporate offices in Culver City, Seattle, San Jose, New York City, Miami and Brazil, our partnerships demonstrate that our boutique approach is a welcome change in an industry not typically recognized for creative solutions. Those who have experienced SIS — whether as an employee or client — will attest to the fact that there is something different about the way our employees conduct themselves and feel about their responsibilities. Ultimately, it is this commitment and drive that makes SIS the industry leader in security.